Many people often ask how Game-Face Motorsports got its name. During the Mid 1990’s while Sergio Nardi was Director of Motorsports for the Porsche Owners Club he also directed the clubs Race Drivers School. Establishing its curriculum and instructing new “racers” on the art of driving at high speeds around a race track. As a matter of fact, much of that curriculum is still in use today. Getting your “ Game-Face” on was one of his motto’s while preparing his students for their turn on course. Insisting they concentrate on the task at hand and clearing their minds of everything else. Thus Game-Face Motorsports was born. 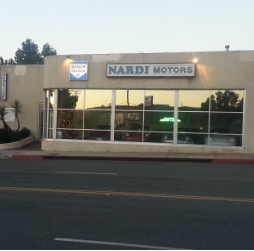 Growing up Sergio spent most of his time at his father’s shop, Nardi Motors, after school. Nardi Motors not only repaired Porsches, but also BMW, Mercedes Benz, and Volkswagen/Audi. Observing his dad’s five technicians and under his watchful eye, his love of racing and Porsche was inevitable. From the drag strips of Southern California to the road course at Riverside Raceway , he gained knowledge, experience and most importantly lessons never forgotten. Humbled by the opportunities afforded him at a young age. Setting off on his own in 1998 and successfully starting his own repair shop in North Orange County CA. He’s now back at the shop where it all began in 1970, returning in 2013 after his father’s retirement.

Today as Owner and Operator of Game-Face Motorsports he continues to dedicate himself to providing the best Dealership Alternative Repair Shop in the area for Porsche, Audi and Volkswagen Automobiles.

We are a small independent shop where personal relationships between us and our clients are formed. It is our belief that we may better serve you in this manner to resolve any problems you may be having with your Porsche, Audi or Volkswagen. More direct hands on approach, rather than a waiting room, a receptionist and a service writer who can’t or won’t answer your questions. You can be sure you will have our utmost attention every step of the way. Here, at Game-Face Motorsport we “ Really Do” appreciate your business. We look forward to meeting you.

Our techs can effectively diagnose and repair any problem

We are a full service facility, ready to assist your every need. Easy drop off and pick up, within our surrounding areas, to make your busy day simple when it's time to get your car serviced or repaired.

Looking to restore your Porsche to like new without the sticker shock. Game-Face Motorsports will only work with Manufacturers of Quality original equipment and aftermarket parts.